Page County is home to not only Valley views and natural beauty, but a rich history and three small towns. For train and history lovers, we recommend touring and taking in the sights of each of our towns, beginning with the county seat and Virginia Main Street Community Luray.

With more than 400 vacation cabin rentals, Luray and Page County — Virginia’s “Cabin Capital” — offer an abundance of options to choose from. (Need help deciding between so many options? Call us at (540) 743-3915 and we’ll be happy to help.) 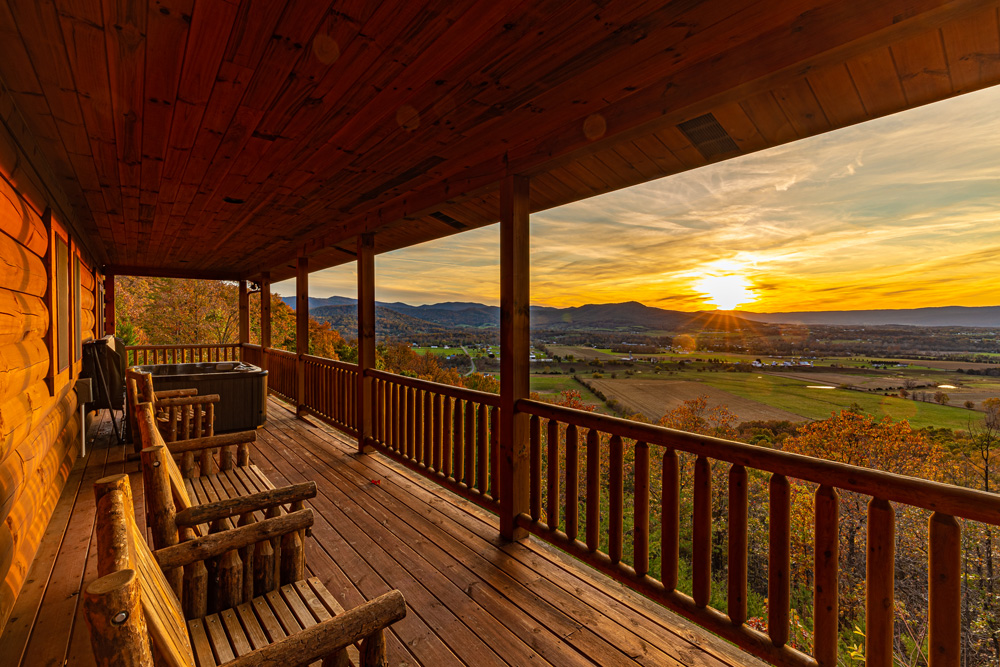 Choose from secluded hideaways along the storied Shenandoah River, Brookeside loglook cabins near Shenandoah National Park, lodging in the park and cabin retreats, like the 1850’s Massanutten Springs and 1947 Rock Tavern retreats.

Or savor the hospitality and history of B&Bs like the South Court Inn and Mayenview, or a room, suite or cottage at the Mimslyn Inn, a Historic Hotels of America member.

CELEBRATE THE PAST AT LURAY CAVERNS’ MUSEUMS AND SITES

With each ticket to Luray Caverns including admission to several other on-site attractions, there’s even more to discover, including the Shenandoah Heritage Village museum complex. Featuring a 7-acre re-creation of a small, 19th-century farming community, the site includes the 1835 home of Page County’s first delegate, the area’s first Black school, the Hamburg Regular School and the signatures of Union and Confederate soldiers scrawled on the walls of the Elk Run Dunkard Church. The Luray Valley Museum, also at the Shenandoah Heritage Village, houses items from pre-contact Native peoples to life in the Valley’s 1920s.

After taking in the history at Heritage Village, “take a spin through time” at the Caverns’ Car and Carriage Museum, home to more than 75 historic vehicles. See the precursor to the Chevy Volt, the 1908 Baker Electric, and take in the indulgence of a 1925 Rolls Royce once owned by silent film star Rudolph Valentino. At the center of the collection is an 1897 Mercedes-Benz, one of the oldest cars in the country still in operating condition.

And “experience the real ‘Toy Story’” at the Toy Town Junction, a vast collection of trains and toys from yesteryear. Featuring several thousand toys and train-related artifacts from a collection that was donated to the Caverns, the self-guided junction also includes displays of pre-World War II toys from Luray Caverns’ private collection.

TAKE IN THE SIGHTS AND SOUNDS OF THE SINGING TOWER

Pack a lunch or grab a bite on-site at the Caverns and drive just across the roadway (Route 211) to the Luray Singing Tower. Officially known as the Belle Brown Northcott Memorial, the functioning carillon was erected in 1937 in memory of Col. T.C. Northcott’s wife.

Towering at 117 feet, the Luray Singing Tower features 47 bells. The largest weighs 7,640 pounds and is 6 feet in diameter; the smallest weighs in at 12-and-a-half pounds.

Recognized as one of the nation’s major carillons, recitals are held, free of charge, in the spring, summer and fall. The site also includes a pond, small dock and benches.

Revisit the 1940s in rural Page County as you walk past the refurbished Hamburg Country Store, a former small-town store established in the early 1900s. And step back in time outside the Mauck Meeting House, a pine structure roofed with chestnut shingles that was used by Valley Baptists from 1790 to 1899.

Round out your tour of the heritage association’s properties in Downtown Luray at the Massanutten School. The one-room school was in use from 1875 to 1937 before it was restored and relocated to its current site next to Inn Lawn Park, behind the Luray-Page County Chamber of Commerce and Visitors Center. Inside the Massanutten School are 16 original double desks, a 100-year-old cast-iron stove, a flag pole used during the Civil War, an 1880 schoolhouse bell and photos and displays.

The old schoolhouse also sits next to the Page Public Library. The 1969 library includes a genealogy and history room, as well as archives from the county’s 153-year-old newspaper, and regularly celebrates Page’s past in themed displays. 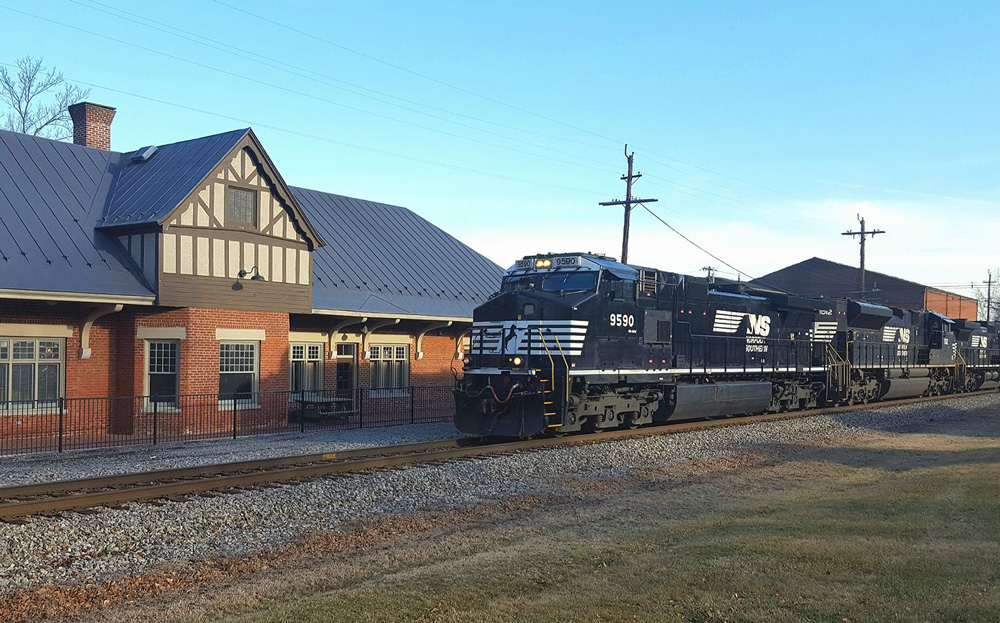 ALL ABOARD AT LURAY’S RAILWAY MUSEUM

It doesn’t take long to realize that the railroad in Luray is an active one, with trains passing through the downtown area regularly throughout the day.

Just over the tracks and adjacent to the Massanutten School, the Page County Railway Museum — located within the Chamber and Visitors Center — provides a historical look at the county’s railroading past. More than 15 years in the making, the 1881 train depot station was officially resurrected as a living museum in 2015 thanks to efforts led by the Page County Railroad Club. Featuring an interior and lighting made to resemble the 1930s and ‘40s, the self-guided museum includes displays, photos, model trains and diorama.

CONTINUE THE DAY WITH LUNCH STOPS AND SHOPS

Luray and Page County’s rich heritage continues along Main Street, from antique shopping or souvenir searching at shops like the 75-year-old Virginia Gift Shop — one of the area’s longest-running businesses — to local cuisine. Grab a sweet treat at vintage-inspired Baby Moons, savor a farm-to-keg pint at Hawksbill Brewing Co. or take in the eclectic decor at Gathering Grounds while you dine.

The downtown area is also home to the Warehouse Art Gallery, a 10,000-square-foot former warehouse featuring more than 1,000 creative works — many inspired by the Valley’s beauty and history. And running through the heart of downtown is the Luray-Hawksbill Greenway. The 3.3-mile walking trail runs along the Hawksbill Creek, beneath train trestles and within sight of 30 murals and public art that are part of the Appalachian Mural Trail.

A Small-Town Step Back in Time

Just a short drive from Luray are the county’s other two towns, both steeped in their own histories and brimming with small-town charm.

Head to the Town of Stanley — a 10-minute drive from Luray — on Route 340 Business, or for a more scenic and less traveled route on winding country roads, opt for Mill Creek Road.

A stopover at the town’s Ed Good Memorial Park highlights local and national history. The park is home to a first responder memorial featuring a steel beam from the World Trade Center. Dedicated on the 10th anniversary of the 9/11 attacks, the beam came through the World Trade Center Program, which donated portions of steel recovered from the towers to cities, towns, firehouses and museums throughout the U.S. and beyond for use in memorial sites.

Designed and constructed by Page County stonemason Clyde Jenkins, a Chimney Monument in the town park serves as a standing tribute to families who once lived or owned land in the Blue Ridge Mountains that are now within the boundaries of Shenandoah National Park. Inscribed on the Blue Ridge Heritage Project Chimney Monument are the names of 135 Page County families who were displaced during the creation of the national park.

Farther down Stanley’s Main Street is the Kibler Library, an all-volunteer library featuring a recently constructed children’s reading and activity area. Learn more about the town’s past and the library’s namesake, William “Bill” Kibler, in a history room. And take in the town’s pride for a 1950s sandlot baseball team; the Stanley team and their memories of a bygone pastime became the subject of a PBS documentary following the donation of a 1955-56 ledger to the National Baseball Hall of Fame and Museum in Cooperstown, N.Y.

In the county’s most southern town, on Shenandoah’s First Street, train lovers can take in the scenes of an active rail yard — the only active station between Roanoke, Va. and Hagerstown, Md. Learn more about the town’s history and an 1890 “boom” in a special “museum” room at the Shenandoah Town Office, located across from the rail yard.

A short walk down First Street and up Virginia Avenue leads to the town’s Veterans Park and a “Wall of Honor” featuring more than 500 commemorative bricks in memory and honor of U.S. servicemen and women from Page County and beyond. The park also includes a gazebo, bench swing, original murals, flag poles and granite stones representing each of the military’s five branches.

Delve deeper into the town’s history at the Shenandoah Heritage Society’s Stevens Cottage, a Virginia and National Historic Landmark built in 1890. The eight-room structure once housed the Shenandoah Land Improvement Co., as well as a printing office that published a local newspaper “The Herald of Progress,” before later serving as a private school and residence of sisters Edna and Mary “Mamie” Stevens. Located on the grounds is a 1917 red caboose railroad cabin car containing railroad artifacts including lanterns, a conductor’s uniform and coal stove.

After seeing the sights in Shenandoah, grab a bite at eateries like Boxcar Deli and Subs or Rudy’s Diner, or pick up an order to eat in one of several town parks.

“At Skyland imagine the colorful entertainment and the parties, the life of vacationers here before the Park was established,” according to SNP officials. “At Rapidan Camp listen to the river flowing and feel how Herbert and Lou Henry Hoover could have felt at their getaway in the mountains.

“Visit Lewis Mountain, today a quiet campground and picnic ground, but once a segregated area intended for black visitors who were prohibited from the other developed areas in Shenandoah.

“Contemplate the history of land preservation and public recreation on the Appalachian Trail, 105 miles of which is located right here.”